Book Review: "In Tune With Love" by Amy Matayo 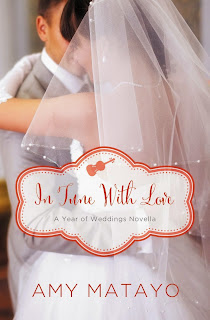 "In Tune With Love" by Amy Matayo is the April novella in the "A Year of Weddings Novella" series.

April Quinn is a song writer hoping to make it big even though her family doesn't think much of her "jingles". She is trying to do everything to make her sister's wedding go smoothly even though she qualifies as a Bridezilla, but she is thrown for a loop when her sister mentions that the wedding singer quit four days before the wedding and she replaced him with Jack Vaughn. The Jack Vaughn who stole her song lyrics three years before. When they are forced to be face-to-face, will they find reconciliation?

I haven't ever heard of Amy Matayo, but I'm not sure that I'll read any others of her books if she has any.  I think she is trying to write in a style that is "every day" language, but it comes across more as crude. When April's sister tells her there wouldn't be much to do as the wedding coordinator, she thinks, "not much to do, my butt." The word "crap" is used frequently and the characters often think of how sexy and hot the other person is. While these things might be what you would find on a TV show, I don't really expect them to be in a Christian book. There also wasn't really any spiritual aspect to the characters. There were a few mentions of the characters begging God for something and it was mentioned that the sister went to the church her wedding was held at, but there wasn't really any evidence of it being a part of their life.

I would encourage people to pass on this book.

"In Tune With Love" is available in Kindle edition:

I received a free eBook of this book from booklookbloggers in exchange for my honest review. All thoughts and opinions are my own.
Posted by Becky Dempsey at 10:48 PM