I Do NOT Like Sharing My House With a Mouse!

I'm not scared of them, they are just a nuisance.  Sort of like the fruit flies that always seem to hover around the kitchen, or the tiny ants on parade around my kitchen sink!   There have been a few "face to face" encounters like when I threw away some trash and found a mouse perched on the front corner of the trash can, or when one came popping out at the top of the couch, but mostly just hearing them scurrying or chewing in the corner.   I have tried several types of traps and poisons, but so far, the only one we've managed to kill is the one I whacked with a broom!   I hope that we will rid ourselves of the pests soon!
Posted by Becky Dempsey at 12:36 PM 1 comment:

I quite often suffer from "brain fog".   You know, when you put things in the cupboard instead of the refrigerator.  Or you walk out of the laundry room on the way to get the next load and immediately forget that you were getting a load of laundry.  When I was pregnant with my first, we were behind a car whose license plate had a "D" in the middle.  For the life of me, I could NOT remember what it stood for and I knew I should!  (It means it's a Dealer plate, by the way!).

This topic came up on with some ladies from church, so I decided to look up some information on it.

These two talk about how your brain actually shrinks during pregnancy:
http://www.thebabycorner.com/page/1245/
http://www.gynob.com/effects-of-pregnancy-on-memory.html

Jonah and the Big Fish

I found these pictures and thought it was cool how it shows there ARE fish big enough to swallow a man! 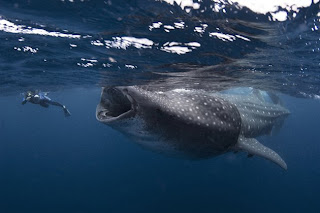 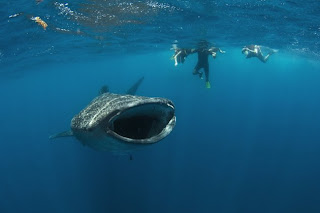 Posted by Becky Dempsey at 5:12 PM No comments:

Here is his yearly picture to tide you over until I can post more! 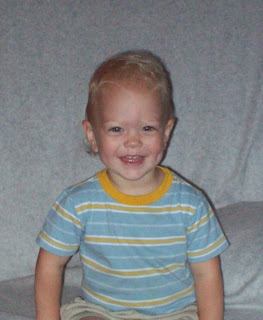 If you want to see the post about him being born, it is here.
Posted by Becky Dempsey at 6:00 AM 2 comments:

We grew up going to the same church, but never knew each other.  He went to the church's school, I went to the public school.  They sat on the organ side, we sat on the piano side.  We didn't really have a youth group, so we didn't meet that way.  I do remember waiting to go in for choir one Sunday when I was 16 and they were talking about the fact that Mary Dempsey had just died and that Dan was only 18.  I remember thinking how hard it must be to lose your mom when you were that young.  Little did I know, it was my future mother-in-law!

Flash forward to April of 1997.... Dan is back from serving in the Army in Korea and his 6th grade teacher (now my co-worker - still teaching 6th grade) introduces him to me so he would know someone in the college and career Sunday School class and be more willing to come.  Okay, Hello nice to meet you.

June of 1997, I go back to Brazil to take a Teacher Training Course to possibly teach English (again) in the school there.

August 8, 1997, I return to the USA and the next 6 months are filled with me seeking God's will and direction in my life as to what He wanted me to do, where He wanted me to do it, and with whom.   During this time, I am going to Sunday School and Bible study and doing things with other members of my class.  This often times included Dan.  He started coming to the school to talk and following me home.

More and more, conversations started including things like, "when we get married".  Around Easter time, there was a nice small engagement ring on sale at Wards and my mom gave Dan the ad.

April 16, 1998, Dan asked if I was free on Saturday because he couldn't find the ring we were talking about.  So we went and picked out the ring and on the way, Dan asked, "You are going to marry me, right?"

So, now, you know the rest of the story ☺

And now the pictures... 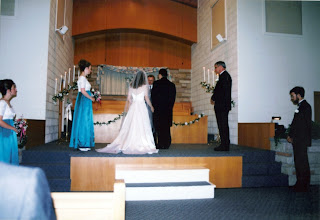 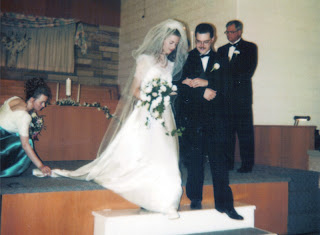 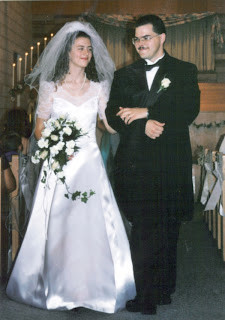 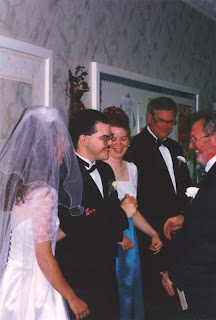 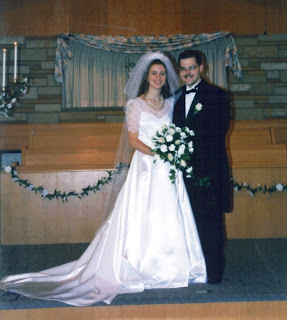 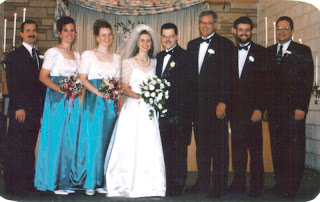 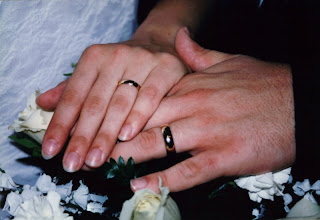 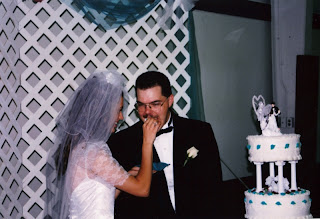 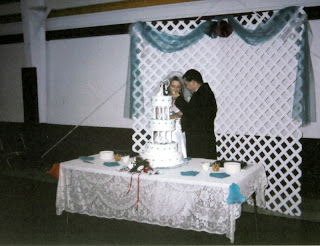 Thursday, Friday, and Saturday of this week was the annual MCC Heritage Festival.  My parents and the kids and I went on Thursday.  Here are some pictures of our visit. 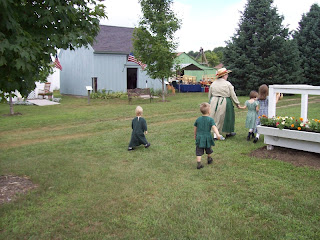 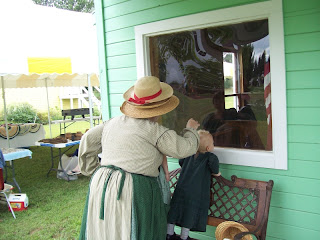 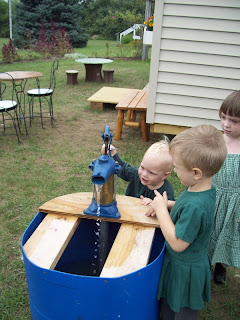 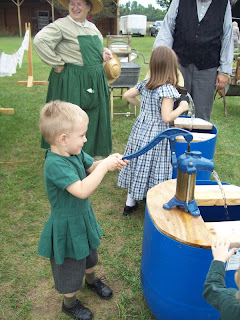 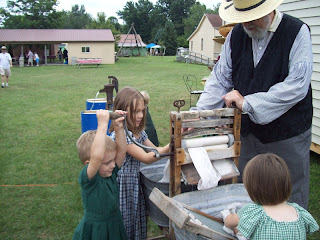 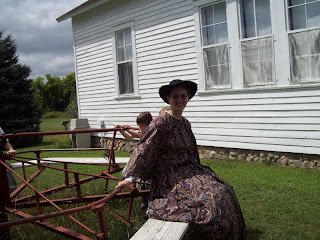 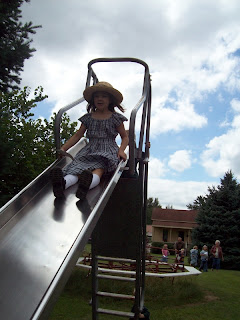 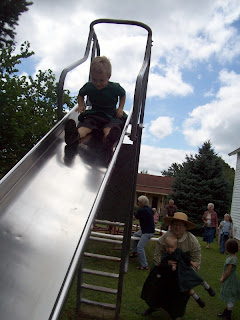 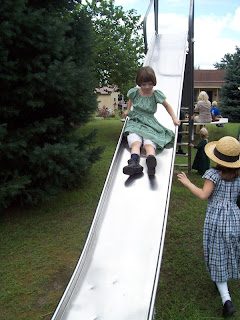 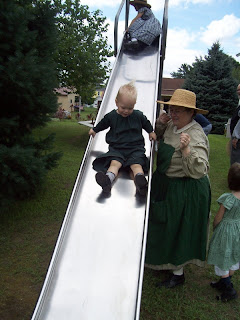 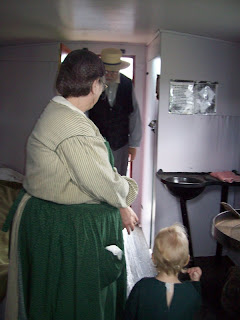 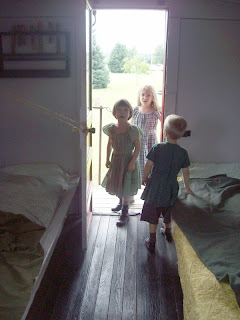 I changed a few pictures to Sepia tone to be more in tune with the era: 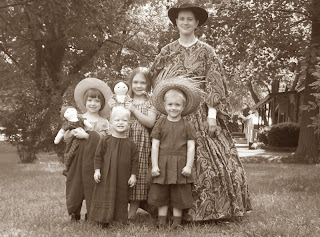 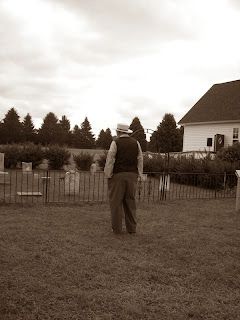 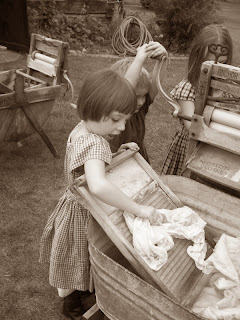 And of course I had to take pictures of the spinning wheels I found!