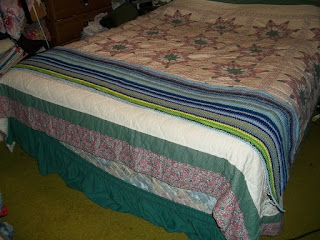 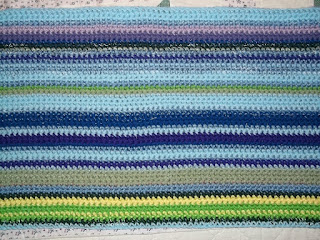 
Book: Amish Wanderer
Author: Laura V. Hilton
Genre: Amish Romance
Release Date: February 14
Bethany Weiss is ready to leave town. Tongues haven’t stopped clacking in Jamesport, MO, since her daed, the bishop, was admitted to a mental hospital after hurting their small Amish community. But her sharpest wounds Bethany hides from prying eyes, quietly biding her time until she can take a chance at a new life—away from Jamesport and away from God.
Silas Beiler was kicked out of his own home. Dogged by a rough childhood and a family who blames him for each new disaster, he begins hitchhiking across the country, sleeping in barns where he can, working for food when possible—headed for Pennsylvania in the hope of some stability.
When Bethany spies a man asleep in the hayloft, she first fears the return of an unwelcome suitor. But when it is Silas who turns and speaks, the memories flood back: a happy summer six years ago full of lemonade, long walks, and budding courtship. Now, however, those months of bliss seem naïve and idyllic. Was their old love strong enough to overcome new pain? Or will hurt and rejection continue to haunt their path?

"The Amish Wanderer" is the "sequel" to "The Amish Firefighter". In order to really understand this book, it would be extremely helpful to read "The Amish Firefighter" first. Some of the references/interactions with some of the secondary characters also made me wonder if they were introduced in one of Laura Hilton's other books (I looked and some of them are). I really liked how plainly the Gospel is presented. I liked watching the characters grow throughout the book. There are some "edgy" topics in this book (rape and abuse), but I thought they were mentioned quite delicately. I don't think I'll let my pre-teen daughters read it, though.  I thought Bethany's reactions were realistic and I ached for her in her struggle to find acceptance and love instead of being forgotten and overlooked.

To celebrate her tour, Laura is giving away  Amish Wanderer, Patchwork Dreams (Amish of Seymour #1), Snow Globe (Amish of Jamesport #1),
a 10 x 17” canvas banner: “Do justly, love mercy, walk humbly” (Micah 6:8), and
Abba Scripture Candle (3” natural, clean-burning wax, scented) – “With God All Things Are Possible”! Click below to enter. Be sure to comment on this post before you enter to claim 9 extra entries! https://promosimple.com/ps/b0d8

"The Amish Wanderer" is available in paperback:

I got a free copy of this book. All thoughts and opinions are my own and are given voluntarily. No compensation was received.
Posted by Becky Dempsey at 7:30 AM 3 comments: 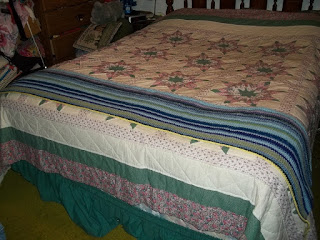 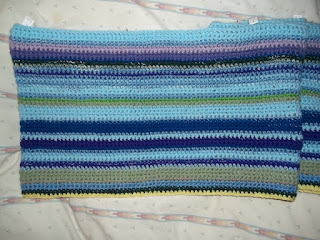 Posted by Becky Dempsey at 3:00 PM No comments:

The teens at our church occasionally sing a song for special music. Sunday was the first that they've done it since Sarah was in the teen group (technically junior high group, but they are together on Sundays) 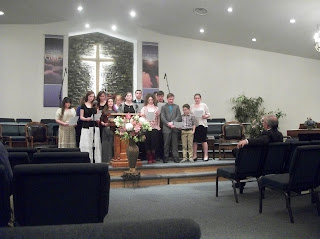 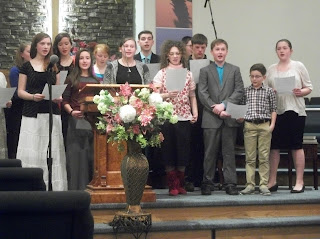 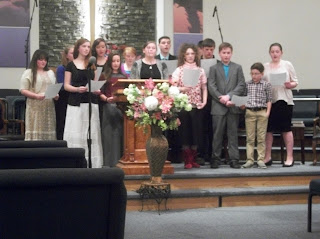 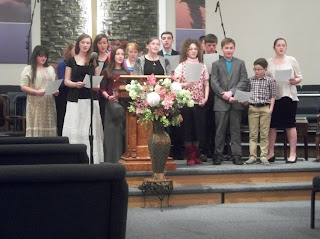 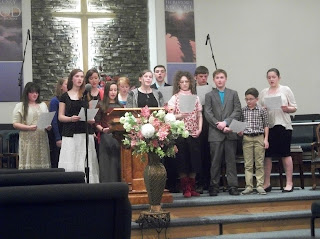 Posted by Becky Dempsey at 7:00 AM No comments: 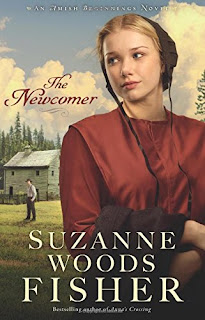 Book: The Newcomer
Author: Suzanne Woods Fisher
Genre: Historical; Amish
Release Date: January 31
In 1737, Anna Konig and her fellow church members stagger off a small wooden ship after ten weeks at sea, eager to start a new life in the vibrant but raw Pennsylvania frontier. On the docks of Port Philadelphia waits bishop Jacob Bauer, founder of the settlement and father to ship carpenter Bairn. It’s a time of new beginnings for the reunited Bauer family, and for Anna and Bairn’s shipboard romance to blossom.
But this perfect moment cannot last. As Bairn grasps the reality of what it means to be Amish in the New World–isolated, rigid with expectations, under the thumb of his domineering father–his enthusiasm evaporates. When a sea captain offers the chance to cross the ocean one more time, Bairn grabs it. Just one more crossing, he promises Anna. But will she wait for him?
When Henrik Newman joins the church just as it makes its way to the frontier, Anna is torn. He seems to be everything Bairn is not–bold, devoted, and delighted to vie for her heart. And the most dramatic difference? He is here; Bairn is not.
Far from the frontier, an unexpected turn of events weaves together the lives of Bairn, Anna, and Henrik. When a secret is revealed, which true love will emerge?

"The Newcomer" starts off right after "Anna's Crossing" ends. It does give "fill-in" details about what happened in the first book, but you get a much fuller picture if you read them in order. I'm not that big of a fan of book series where the hero and heroine get their "happy-ever-after" by the end of book one, but then in book two they aren't together anymore, or having troubles. I was worried that was what I was going to run into with this book. I felt like this was more a continuation of the first book because their relationship was still fairly new and not developed much by the end of Anna's Crossing. I liked Bairn's growth in this book and his coming to know what was important and valuable to him. This book was similar to her "Bishop's Family" series where we follow more characters than just the main hero and heroine. We see things from the perspectives of Anna, Bairn, Felix, and Dorothea. Dorothea's transformation during the book was encouraging and I was glad to see her beat the depression that always seemed to hover over her. I wanted to give some of the characters a shake to wake them up to what was going on! I enjoyed the inclusion on actual people (although fictionalized) in the book and the historical accuracy. This book had many different layers to the story and I was glad to continue my journey with the church from Ixheim. I look forward to reading the third book in the series.

Suzanne Woods Fisher is an award-winning, bestselling author of more than a dozen novels, including Anna’s Crossing, The Bishop’s Family series, and The Inn at Eagle Hill series, as well as nonfiction books about the Amish, including Amish Peace and The Heart of the Amish. She lives in California. Learn more at www.suzannewoodsfisher.com and follow Suzanne on Twitter @suzannewfisher.

Pennsylvania of 1737, the setting for The Newcomer, is like a foreign country. Parts of it might seem familiar—the same hills and creeks and blue sky, but we’d hardly recognize the settlers. People like Anna, or Bairn, or the mysterious Newcomer. We wouldn’t be able to understand their language, their customs and traditions. Their world was that different from our modern one.
The first group of Amish immigrants (first written about in Anna’s Crossing and followed up in The Newcomer) settled northwest of Philadelphia, then a vast wilderness, and relied on each other for safety, security, building projects, and church. In nearby Germantown, settlers were tradesmen, so they clustered houses together in small knots. The Amish farmers took out land warrants for sizeable properties and lived considerable distances from each other.
In The Newcomer, Anna cooked food in a cauldron over a large hearth. One-pot meals can trace their beginnings to open-hearth cooking when ingredients for a meal went into a large kettle suspended over the fire. Traditional dishes—ham and beans, pork and sauerkraut—used sturdy, available, and simple ingredients that improved with long, slow cooking. The dishes could be easily expanded when the need arose to set a few more places at the table. And it did, often. Large families and unannounced company inspired Amish cooks to find ways to “stretch the stew.”
Noodles (including dumplings and rivvels) could be tossed into a simmering broth to make a meal stretch. Most farms had a flock of chickens, so eggs were easily at hand. Today, homemade noodles are still a favorite dish.
Another “stew stretcher” was cornmeal mush, originally eaten as a bread substitute. Early German settlers who made their home in eastern Pennsylvania roasted the yellow field corn in a bake oven before it was shelled and ground at the mill. The roasting process gave a nutty rich flavor to the cornmeal. Mush is still part of the diet the Old Order Amish—cooked and fried, baked, added into scrapple, smothered in ketchup. Dress it up and you’ve got polenta.
Now here’s one thing we do have in common with 1737 Pennsylvania immigrants…a love of good food and a shortage of time! Here’s one of my favorite one-pot recipes—probably not the kind of stew Anna might have made for ship carpenter Bairn or the mysterious Newcomer (ah, which man stole her heart?)…but definitely delicious. Enjoy!
Lentil Chili
Here’s one of my favorite “stew stretchers.” You can expand it even more by serving over rice.
Ingredients:
1 onion, diced
1 clove garlic, minced
10 c. water
1 lb. dry lentils
1 tsp. cumin
1 tsp. chili powder
1 tsp. salt (season to your taste)
½ tsp. pepper
2 c. salsa (your favorite variety)
29 oz. canned tomatoes, crushed

To celebrate her tour, Suzanne is giving away a Kindle! Click below to enter. Be sure to comment on this post before you enter to claim 9 extra entries!https://promosimple.com/ps/b0d1
"The Newcomer" is available in paperback:
and in Kindle edition:
I got a free copy of this book. All thoughts and opinions are my own and given voluntarily. No compensation was received.
Posted by Becky Dempsey at 7:00 AM No comments:

The kids had their Valentine's Day parties on Friday in conjunction with their Dance-a-thon fundraiser. 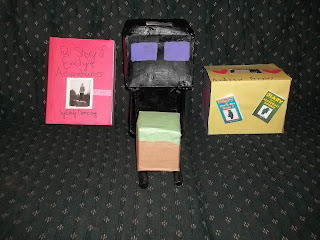 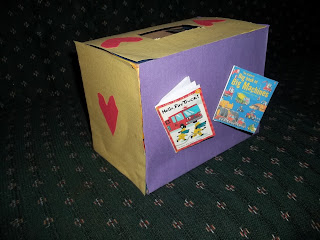 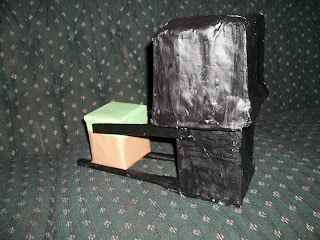 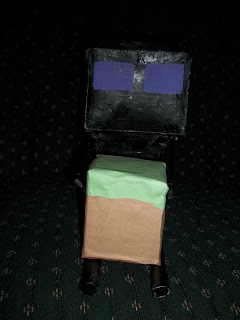 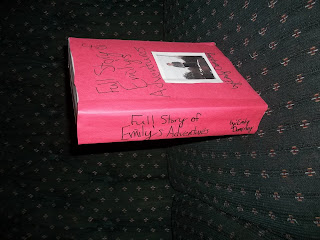 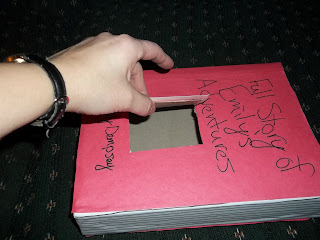 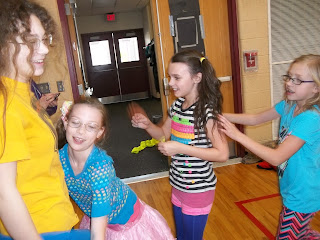 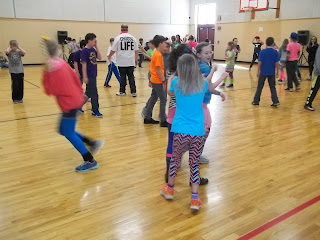 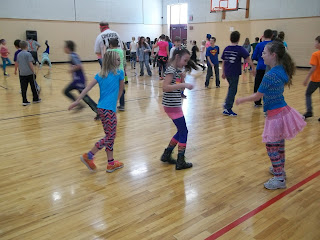 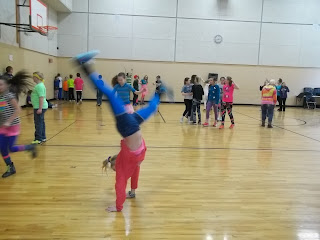 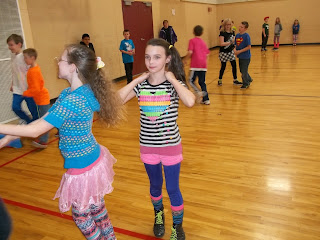 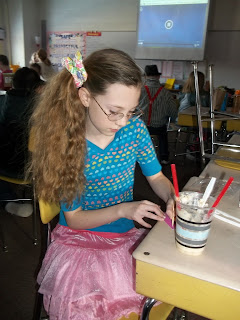 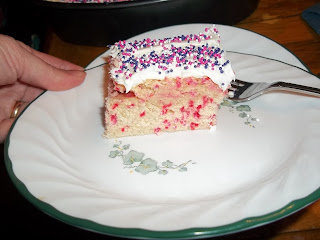 Posted by Becky Dempsey at 3:20 PM No comments: