Book Review: "Chance of Loving You" by Terri Blackstock, Candace Calvert, and Susan May Warren 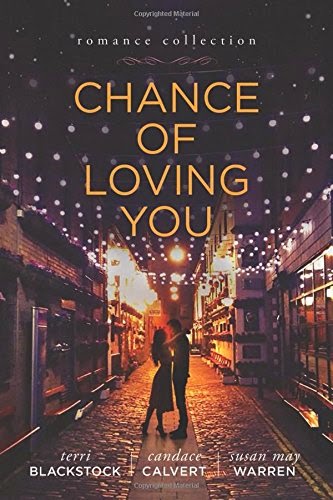 "Chance of Loving You" is an anthology by three bestselling romance authors:

"For Love Of Money" starts with Blake Adcock sitting in a restaurant ordering food he wasn't eating so he wouldn't have to leave.  Julie Sheffield spends time with him and wonders if God was answering her prayers.  That is until Blake leaves half of a sweepstakes ticket with an IOU written on the back.  Will they have a chance to see if their chance meeting was from God, or will the love of money get in the way?

"For Love of Money" was my least favorite of the stories in the book.  I haven't read anything by Terri Blackstock before and am not as familiar with her "voice". I didn't dislike the story, though.  I think both Blake and Julie had moments when I didn't like them very much,  but there were also times when I liked them both.  I guess that makes them like real people.

"The Recipe" is the second book I've read by Candace Calvert and is actually the first story I read in "Chance of Loving You". Having recently read "By Your Side", I was excited to read more of her books.  Taylor Cabot makes an appearance from "By Your Side", but the story follows her cousin, Aimee Curran.  Aimee hasn't found her place in life, but hopes that entering the Vegan Valentine's Bake-off will show she's finally found her calling.  She doesn't get much of a chance to show her cooking prowess being a dietary assistant at the hospital, but she tries to add in extra little touches to cheer up the patients.  When one of her garnishes backfires, Aimee must face the patient's grandson, Lucas Marchal.  Lucas feels like his grandmother has given up and he tries to do everything in his power to keep her with him.  The more time they spend together, the more they question what their priorities are from life.

It was fun to watch Lucas and Aimee's relationship grow.  I held my breath when things seemed to be spiraling out of control and hoped for something that would save the day.  My solution happened, but didn't solve the problem the way that I expected.  I am hoping to see more of Lucas and Aimee in future books by Candace Calvert.

In Susan May Warren's "Hook, Line & Sinker", Abigail Cushman has spent the past year trying to avoid Ross Springer.  Their almost decade-long friendship was ruined after Scotty Springer's death.  Now they are both competing in Deep Haven's fishing contest.  Will being forced to spend time together bring them back together or drive them further apart?

I enjoyed reading "Hook, Line & Sinker"  I liked both Abby and Ross and felt the pain with them.  They were believable characters and I was rooting for them to mend their relationship.

Each of the stories include a recipe at the end that goes along with the story.

"Chance of Loving You" is available in Kindle edition:
Paperback:

I was given a free paperback copy of this book from Tyndale for me to review.  A positive review was not required and all opinions are my own.
Posted by Becky Dempsey at 1:18 PM