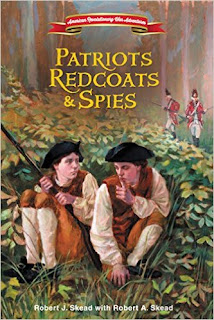 When John Clark's father is shot by British soldiers, he and his twin brother Ambrose are the only ones who can carry out their father's mission-deliver a message to General George Washington-as fast as possible. With only each other to rely on and the road full of obstacles, will they complete the mission successfully?

"Patriots, Redcoats, & Spies" is the first book in the American Revolutionary War Adventures series written by father-son team, Robert J. and Robert A. Skead and is loosely based on their ancestor Lamberton Clark's story.

I enjoyed reading this story even though it is geared for children aged 8-12. I liked the interactions between the brothers and it was realistic in how brothers would behave. The historical aspect of the book was also intriguing and I liked how it taught children about our nation's history in a fun and entertaining way. It also allows them to see some of the struggles and difficulties that the Patriots faced during the Revolutionary War. The book was suspenseful as you do not know what is going to happen next for John and Ambrose, or whether their father is okay. There are many times through the book that the characters pray or discuss Providence. The end of the book gives a note from the storytellers telling a little more about the Culper Spy Ring, a glossary, historical characters, letters from George Washington, and discussion questions.

I think this would be a great book for either boys or girls aged 8-12. Both of my daughters enjoyed reading the story.

or in Kindle edition:

I received a free copy of this book from Zonderkidz to review through their zblogsquad. All thoughts and opinions are my own and a positive review was not required.

Posted by Becky Dempsey at 1:43 PM