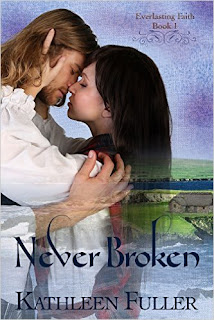 "Never Broken" by Kathleen Fuller was published previously, but has been revised and republished.

Rory O'Leary is summoned home to his wealthy aunt and uncle's house for his cousin's wedding. While he is there, he has a chance encounter with  a young peasant woman, Shannon Cahill, in his uncle's rose garden. Soon after, things take a turn for the worse when his uncle dies and he is turned out of the house by his cousin and the potato famine hits. Neither Rory or Shannon can forget the other one, and don't think they will ever see each other again, but God is leading them and forms a bond that will be never broken.

"Never Broken" is written in three parts. Part one follows Rory, Shannon, and the people that they interact with. Part two follows a completely different set of people with Elspeth Ross and Iain Mackay mainly.  Part three brings some of the characters together and wraps up a few of the story threads. Besides following different people, Part one and two were also unique in how the people viewed life. Rory and Shannon are Christians and although they are attracted to each other, they are very careful to not fall into temptation and begin a sexual relationship. Part two does not have that filter and the characters succumb to their fleshly desires.

This story has a lot of characters that it follows. By chapter 5, there had been 6 different people it followed. It was a unusual format, but it was nice to know what some of the more secondary characters where thinking. I did wonder a few times why we were seeing the story from that particular character's viewpoint.

"Never Broken" is the 1st book in the Everlasting Faith series and does NOT finish all the story threads. It doesn't leave them all unresolved, but some threads do carry over to the next book. I did not feel like it was a complete cliffhanger book, though, as the main story was brought to a resolution. That isn't to say that Rory and Shannon's story won't continue in the other books, but their "happily ever after" could be finished as it is.

I enjoyed learning a bit about Ireland during the potato famine days.

"Never Broken" is available for Kindle:

I was given a copy of this book by the publisher for me to review. All thoughts and opinions are my own.