Adventures in Knitting a Newsboy Hat

In "Adoring April" by Chautona Havig, the character April has a particular hat and Camy Tang wrote a pattern for the hat. Chautona was looking for someone to knit the hat in denim yarn and I thought I'd give it a try. I got "I Love This Yarn Stonewash" from Hobby Lobby in denim. I dug out my trusty interchangeable knitting needles only to find that the tips that I needed were not in the box. I found a different set that I had gotten from someone and tried them, but the cable was too stiff. Undeterred, I ordered a replacement set of tips and a couple of cables. While I waited for them to arrive, I looked in my old knitting needles and found a set of 4 double pointed needles in the correct size. I was excited I could get started! I hadn't ever used double pointed needles before and my first attempt had one of the needles getting twisted and I had to start over.

I was on a roll (not counting the times that I messed up the lace pattern and had to rip out a row). Once I got far enough along to see the lace pattern taking shape, I realized that I had been reading the lace chart backwards (left to right instead of right to left) as the pattern didn't specify. So when I got to the "knit 2 together" parts, I had to switch them to "slip, slip, knit" instead or they would be angling the wrong direction.

Originally, I had a marker at the beginning of the row and at the half way mark. Eventually, I put in markers at the beginning of each pattern repeat which made it much easier to count and make sure I had the correct number of stitches. (You can see the markers in the first picture).

At the end of the lace chart, it gives the option to make the hat taller by utilizing a smaller pattern repeat. I planned on doing this as I assumed the original hat was done by using it. I discovered that it was impossible to use the smaller lace chart as it was a 6 stitch repeat and you have 128 stitches after finishing the first chart. 128 is not divisible by 6 so it wouldn't work out to use it. 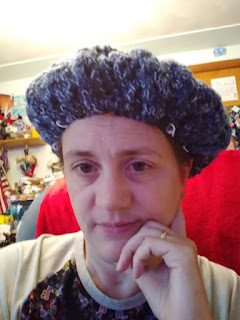 Knowing the smaller chart was out, I moved on to the hat band and the brim. I tried the hat on when I was finished and it was huge! I measured it and it was the size the pattern said it would be--24" circumference. I checked and the average adult male head is only 22.5", so this hat would be big on anyone. 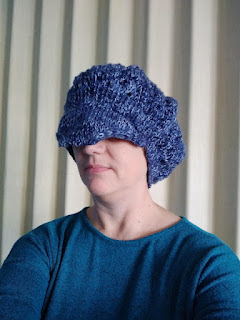 I added a zigzag of yarn like the pattern suggested and ran a row of elastic through it. 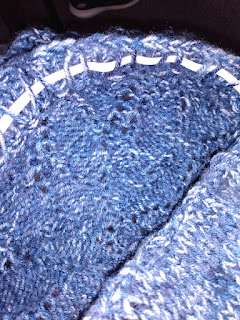 After doing that, I was able to get it to fit. 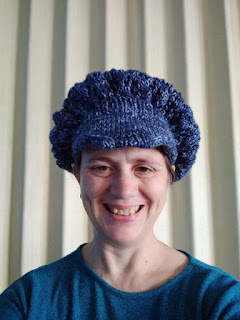 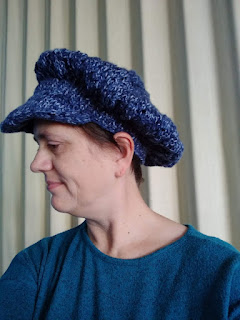 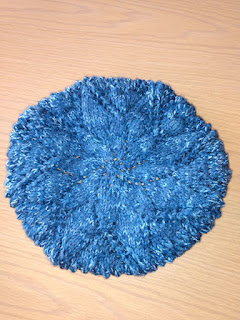 I am wondering if it would work to take out one of the pattern repeats and just do 7 of them instead of 8. My mathematical reasoning about why it would fit better with 7 repeats is because the hat is 24" around with 8 sections. This means that each section contributes 3" to the final circumference. If you took one of them out, it seems that the final hat would be 21" instead, which would fit my head much better!
I was left with 1.25 oz/35 g of my 5 oz/142 g skein of yarn. 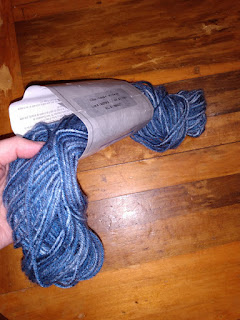 Posted by Becky Dempsey at 6:36 PM

Oh, I LOVE THIS! AAAK! I'll pay you to try again by just leaving that row out. I'm curious to see if it'd work!

I have all the kinks worked out in what to do now, a second attempt should be easier ;)

It is so cute!

The finished hat is really cute!