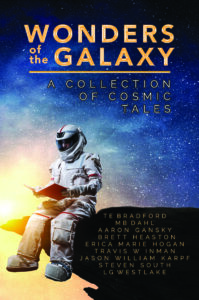 Book:  Wonders of the Galaxy

A series of space tales based on parables from the Holy Bible.

The far unit opened. Marta emerged, her dark eyes bright with excitement. “Only took me two tries …” Her voice trailed away as she looked around the room. “What’s wrong?”

Her partner, Otto, crossed his hands twice in an X shape, the sign for distress or problem. Born mute, his expressive hazel eyes conveyed grave concern without any need to speak.

“The full Xanxari onslaught has begun.” Urie’s statement carried the finality of his confidence in Sarah’s vision.

Davison saw the truth in Urie’s words. His primary gift, though still fairly new to him, was becoming stronger with each occurrence. The first time he’d seen the silvery veil, it had been wrapped around his partner like a coat made of the northern lights. The ethereal aura, he’d come to realize, was a visual representation of truth.

Davison turned to find his partner’s gaze already on him, reading his face. “We don’t have much time.”

“These lifeforms are the first extraterrestrial life ever discovered,” Mary pointed out. “And they can survive conditions no other life can. They are a greater wonder than anything science has ever seen before—and a greater miracle than anything any human has ever created.

Come back after August 27 to see a list of the other excerpts.

Jason William Karpf is a multitalented actor, musician, professor, and Jeopardy champion whose writing runs the gamut from true crime to speculative fiction.

Aaron Gansky is an award-winning novelist and Dungeons and Dragons whiz who lives for his children, coaching football, and watch Marvel movies.

Erica Marie Hogan’s books range from long ago historical dramas to frozen fantasies on faraway planets. Regardless of where the story originates, it comes from the heart—because Erica believes genres are transcendent.

Brett Heaston is the creator of the Message to Kings podcast and the author of The Resilience Awakening. He lives in the Pacific Northwest, a history nerd, and an adventure junkie.

Steve South is a traveler, a karaoke singer, and a profound believer in the power for stories to move people; his first novel, The Queen of Steel and Fire, won the 2019 Minnesota Author Project Award for YA fiction.

L.G. Westlake lives in the “Land of Enchantment,” but also lives a dream life in far-flung galaxies where she regularly charts the unknown; her previous novels have included award-winning fantasies and thrillers.

M B Dahl is a wife, mother, and award-winning author of dystopian adventures. She loves dressing up like a warrior and fighting dragons, imaginary or real.

T.E. Bradford is an international bestselling author, a Selah award finalist, and a self-proclaimed geek who believes her writing is “a little piece of magic” given to her by God.

Travis W. Inman has been a cowboy, a missionary, a soldier, and more in his multi-storied career, and his stories reflect his diverse background. In his spare time, he searches for hidden treasure, both financial and culinary.

Posted by Becky Dempsey at 7:25 AM