About the Tour
The clock is ticking until the release of “Protecting the Poor!” This is the third and final month of Tales of Faith 3-month tour. We’ve spent a month on “Befriending the Beast,” a month on “The Secret Slipper,” and now, are looking at a month digging into “Protecting the Poor”—the history behind it, behind-the-scenes of writing and editing, the messages threaded through it, and more. Amanda will link to each blog on With a Joyful Noise, so check in every week and see what blogs have a special Tales of Faith feature! 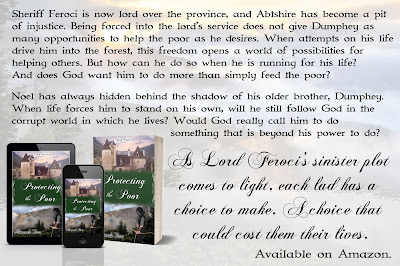 Pre-Order Protecting the Poor on Amazon

Do you want to get a signed paperback copy of "Protecting the Poor?" Order here! 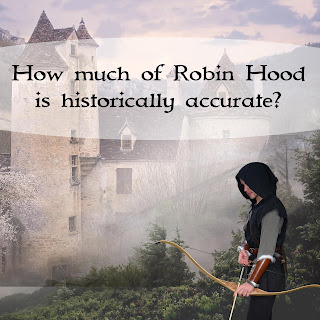 How Much of Robin Hood is History?
As a kid, I thought Robin Hood was a historical figure. Well… then I grew up. And got much wiser. And crushed my childhood fantasies. Because I realized it was just a tale. Not quite a fairytale, but definitely a tale.
If you think about it, though, even fictionalized stories have an element of truth (I mean, consider nursery rhymes—they’re more than just “cute little ditties” because of their political inferences). So, I do believe that Robin Hood has historical elements, even though the ballads and tales have skewered the original accuracy. There are many historical characters from which a Robin Hood character could have been generated. King David in the Old Testament. Eustace the Monk. Fulk FitzWarin. The list can go on of historical figures who were outlawed, lived in the forest, fought against the injustice of nobility (or, some stories, just fought against authority).
Robin Hood first appeared in historical recordings as early as mid-1300s. Many refer to “Robin Hood and the Monk” (an originally untitled piece) as one of the first ballads of Robin Hood. It is 92 stanzas long, so I’ll just share the first two (read the full ballad here):
In somer, when the shawes be sheyne,
And leves be large and long,
Hit is full mery in feyre foreste
To here the foulys song,
To se the dere draw to the dale,
And leve the hilles hee,
And shadow hem in the leves grene,
Under the grene wode tre.

Throughout the ages, Robin Hood has been known as Robin des Bois, Robehood, Rabunhod, Robyn Hode, Hobbehod, Robert Hod and many other variations of “Robert” and “Hood.” Though historians cannot prove his existence, there is a traditional grave for him in Yorkshire. Some insist that Robin Hood never existed but was, more or less, imagined for bedtime stories for the wee ones.
What do you think? Did a Robin Hood likely exist? If so, do you think he was more culprit or hero?
If your Robin Hood addiction (ahem… fascination) wants to learn more about the tales, ballads, and historical elements, here are some great websites to check out:
https://robinhoodlegend.com/early-ballads/
https://www.history.com/topics/british-history/robin-hood
http://www.mythencyclopedia.com/Pr-Sa/Robin-Hood.html

About AmandaAmanda Tero began her love for words at a young age—reading anything she could get her hands on and penning short stories as young as age eight. Since graduation, she has honed her writing skills by dedicated practice and study of the writing craft. She began her journey of publication with a few short stories that she had written for her sisters and continued to add to her collection with other short stories, novellas, and novels. It is her utmost desire to write that which not only pleases her Lord and Savior, but also draws the reader into a deeper relationship with Jesus Christ. 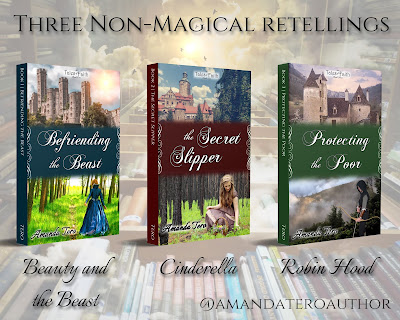 I haven't been much into Robing Hood growing up, but I think this is one I'd like. :)

Ooh, I like to think medieval legends have some elements of real people in them, especially Robin Hood and King Arthur, haha!!