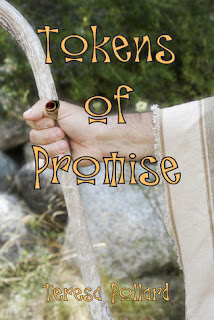 Inspired by The Bible, Genesis 38, "Tokens of Promise" is an imagination of the love story of Judah and Tamar.
“Beware, Prince of Hebron, her witching ways are strong.” Ben Qara’s evil words still rang in his ears. Judah is sure he was bewitched by the beautiful Tamar. She is all he can think about. But no, it must not be. He will not break his vow to Yah. He already has a wife, and he will have only one. Tamar must marry Er.
Rescued from disgrace by the handsome Judah, Tamar is already in love with the kind stranger. She eagerly followed Emi’s advice on how to win him. It almost worked. He’d promised. If only his servant hadn’t come at that moment, she’d be his wife now instead of going home with him to be his daughter-in-law. Why had her father agreed to this? Surely he could see her destiny was with Judah?

When I agreed to review "Tokens of Promise" I only knew that it was a fictionalization of the story of Judah and Tamar from Genesis 38. I did not know about the notation that said "We recommend that this fictional story be reserved for readers aged 18+, due to the non-graphic inclusion of sexual themes." I'm not sure that I would have read it then. The story is a different take on the story of Tamar and Judah that it was God's will from the start for Judah to marry Tamar and that Judah had followed human reasoning when he gave her to Er instead. When both Er and Onan died, it was then up to Tamar and Shelah to orchestrate the marriage of Tamar to Judah instead of Tamar just taking the fulfillment of the levirate marriage into her own hands to get an heir through Judah instead of Shelah. The book also says that Judah was tricked into marriage instead of what the Bible says where it says that Judah saw a Canaanite woman and took her as his wife. The author's note at the end of the book was interesting learning why she portrayed Er's sin the way she did based on Talmud tradition. The book was well written, but I was not comfortable to all the references to "he came in to her" , "he felt his seed release inside of her", "he came so close to coming in to her that she felt him touch her leg", "I shall plant my seed in her as the Canaanites do where it can never bear seed"...."in the manner of men (with men)". They weren't graphically described, but it was more than I like to have in the books I read.

"Tokens of Promise" is available in paperback:

I was given a free copy of this book in exchange for my honest review. All thoughts and opinions are my own and no other compensation was received.
Posted by Becky Dempsey at 3:35 PM