Book Review: "In the Shadow of Thy Wings" by A.M. Heath 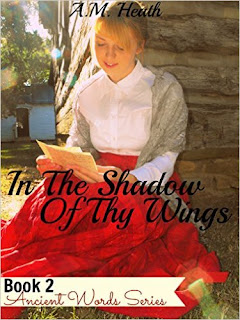 "In the Shadow of Thy Wings" by A.M. Heath is the second book in the Ancient Words Series. It picks up where "Where Can I Flee" ends and should be read in order or it won't really make sense. This book follows Frank Harper, Sally Chandler, Claire Harper, Olen Harper, and Ralph Williams. There are some letters between the characters, but not as many as are included in the first book. The romance that I wished for in the first book was finally brought out in this book. I enjoyed watching the romance blossom and grow. The Harpers and Chandlers feel like friends, so I wept with them and rejoiced with them in turn. There were several unexpected twists that were quite surprising to me.

I look forward to reading the next book in the series to find out how Frank Harper, George Chandler, and Ralph Williams fare after the war is ended.

"In the Shadow of Thy Wings" is available in Kindle edition:

A.M. Heath is participating in several giveaways and Facebook parties in conjunction with the release of "In the Shadow of Thy Wings".

***A Rafflecopter giveaway running from Dec 3-18:


I received a free copy of this book in order to review it. I got no other compensation and all thoughts and opinions are my own.
Posted by Becky Dempsey at 9:27 AM

Thanks so much for featuring In the Shadow of Thy Wings on your blog today! I LOVE your background. It's so pretty and what I would have chosen for myself. :)