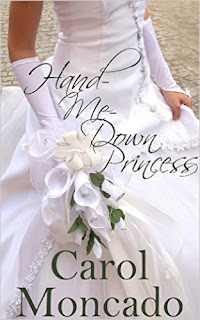 Jessabelle Keller is getting married to Prince Malachi of Mevendia. The problem? She's never met him. Her father once saved Malachi's father and for that, the future king had said that one of his sons would marry her one day. Jessabelle would much rather hide away than be thrust into the spotlight.

Prince Malachi is also not that thrilled about getting married to a stranger, but he vows to be faithful to her no matter what. When gossip and other trials come along, can they forge a bond and make Jessabelle realize she isn't just a hand-me-down princess?

"Hand-Me-Down Princess" by Carol Moncado is the first in the Brides of Belles Montagnes Series, but it also includes characters from her Montevaro Monarchy series, so it would be best to read that series first. There is enough told in "Hand-Me-Down Princess" for you to basically know what had happened, but it would be clearer to read them in order.

I could relate to Jessabelle's desire to stay out of the spotlight. She was able to stretch her comfort zone through the story and had a less difficult time with it all by the end of the book. I really liked Malachi and his integrity. He was very caring and understanding toward Jessabelle. The characters often prayed or sought what God would have them do.

This is a romance story, but it also has an element of mystery running through it as well. I had a hard time putting the book down and stayed up later than I should several times to read. I wanted to tell off some of the characters and keep them from hurting Jessabelle and Malachi with their deceit.

I would recommend this book.

"Hand-Me-Down Princess" is available for Kindle:

I received a free copy of this book in exchange for my honest review. I did not receive any other compensation and a positive review was not required. All thoughts and opinions are my own.

This one sounds good too.